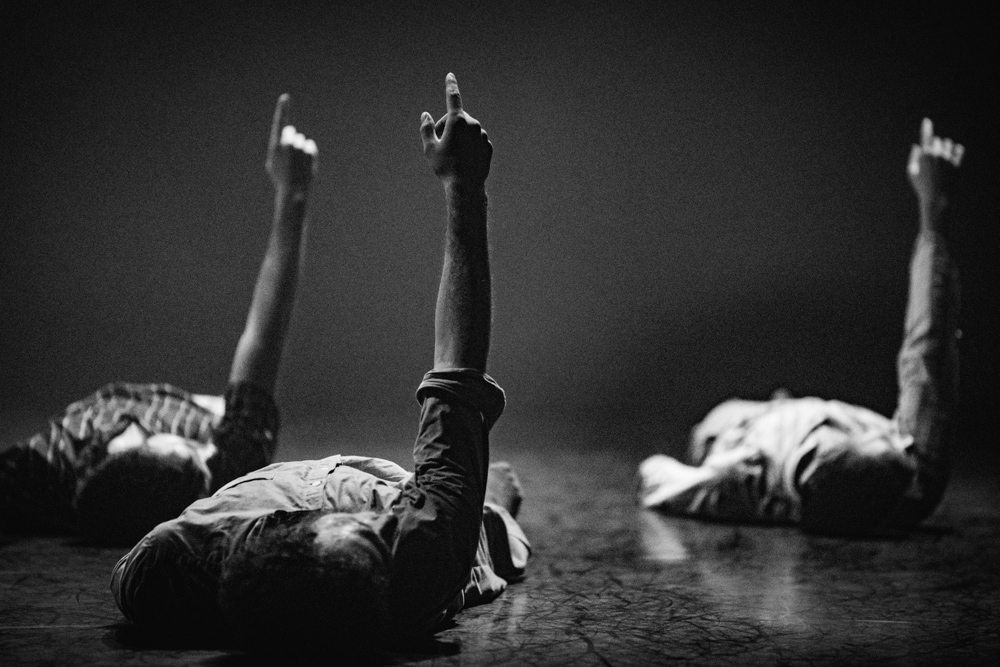 Shechter’s New Creation, sculptured as an antidote and partner piece to the murderous, poisonous anarchy of his 2016 success, Clowns, brings a tender, fragile energy to the stage. It offers a raw and compassionate moment to balance the forces of aggression and violence that press on us daily. A shield to protect us from the noise of life outside, and a place that allows the performers to shine, be fragile, be seen for their utmost human qualities. Violence, tenderness and hope are all laid bare through Shechter’s achingly beautiful, cinematic lens.

The recently honoured OBE choreographer spoke of his expectation for this new production, presented within the familiar surroundings of Brighton Dome, where Double Murder will premiere.

Hofesh Shechter said, “I am very excited to bring a new creation to Brighton Festival next year. Together with the dancers I’m looking to find the spark of hope, that deep and childish, fragile human need of warmth. We walked into the studio feeling like a balance is required, a place where we allow time to be on our side as opposed to against us. A fix.”

Following its world premiere at Brighton Festival 2020, it will travel to HOME, Manchester, with further UK and international dates to be announced.

The production will premiere at Théâtre de la Ville – Paris with 19 performances from 3rd to 25th April with further international and extensive UK dates to be announced shortly, including HOME in Manchester and DanceEast, Ipswich. We regret that the  performances at Teatro Municipale Romolo Valli, Reggio Emilia and Teatro Grande, Brescia, Italy, have been postponed until Autumn 2020. Dates to be announced soon.

Danced to a bespoke, new recording of Shechter’s music and accompanied by a landscape of designed, digital animated projections, POLITICAL MOTHER UNPLUGGED will invoke the ferocity and spirit of the original for a new era.

The 2020 Shechter II programme continues to build on the company’s commitment to developing young artists. Few up-and-coming dancers have the chance to perform in different spaces to different audiences supported by an experienced creative and technical team.  Shechter II allows dancers, at the early stages of their career, the opportunity to be mentored by long-standing HSC members and have access to world-renowned venues and provides a springboard into the world of professional dance.

Political Mother premiered on 20 May 2010, at the Brighton Festival, UK.

The critically acclaimed Grand Finale, which was nominated for an Olivier and Helpmann Award for Best (New) Dance Production and this year received a Dora Award for Outstanding Touring Production, continues to thrill audiences around the world with new dates announced.

Featuring 10 dancers and a live band of musicians, Grand Finale is a spectacularly bold and ambitious piece which is at once comic, bleak and beautiful; evoking a world at odds with itself, full of energy and violent comedy. Filtering this irrepressible spirit, Shechter creates a vision of a world in freefall, part gig, part dance, part theatre and wholly original.

Grand Finale is produced by Hofesh Shechter Company and commissioned by Georgia Rosengarten.

Grand Finale is generously supported by the International Music and Art Foundation.

We regret that the following performance has been postponed until Autumn 2020. Dates to be announced soon.

Our next performances dates will be from 03 – 25 April 2020 at Théâtre des Abbesses – Théâtre de la Ville, Paris: